Well, another Oscars ceremony has come and gone and with it comes a million think pieces on what people thought of this year’s choices: how they cried when blank won an Oscar, or how they didn’t like the fact that blank won an Oscar, or how their favorite superhero movie should have been nominated because “It’s really good guys, it’s not your average superhero flick.” And these are among the kinds of things that I myself was planning on writing just mere hours ago, and yet by the time the ceremony concluded and all the Hollywood elite walked away with their shiny new award, I found myself at a loss for what to say. Sure, I could write about how Baby Driver was very clearly robbed in the editing categories, or how it’s great that Get Out won best original screenplay but didn’t deserve it, or how Roger Deakins finally got his well deserved win for Blade Runner 2049. However, I just couldn’t stop asking myself, “Why am I writing about any of this?” And that’s when it hit me, I don’t care about the Oscars anymore. I really don’t care at all.

I don’t think this is an unpopular opinion by any means, Oscar ratings have been on the decline for years now. But it was something that was strange for me, someone who is a self proclaimed mega film fan to realize. That even in a year where there were films in the running like Three Billboards and The Shape of Water that I absolutely adored, I just couldn’t care less about the awards in the end.

This is not at all how I felt a year ago. A year ago I remember very excitedly watching La La Land win 100 golden statuettes in a row. There was a sense of giddiness I got watching each win. Watching that now iconic flub, in which La La Land was mistakenly named best picture was an experience like no other. I didn’t feel that way this year. The magic that I once experienced has disappeared. What was once the pinnacle of what a filmmaker or actor could achieve in my mind I now see as a corporatized, carefully chosen popularity contest by a group of old Hollywood elitists. Most of whom haven’t even seen the majority of the films they are voting for.

To fully understand how much of a sham the whole Oscar production is, just take a look at the Best Animated Feature, category. 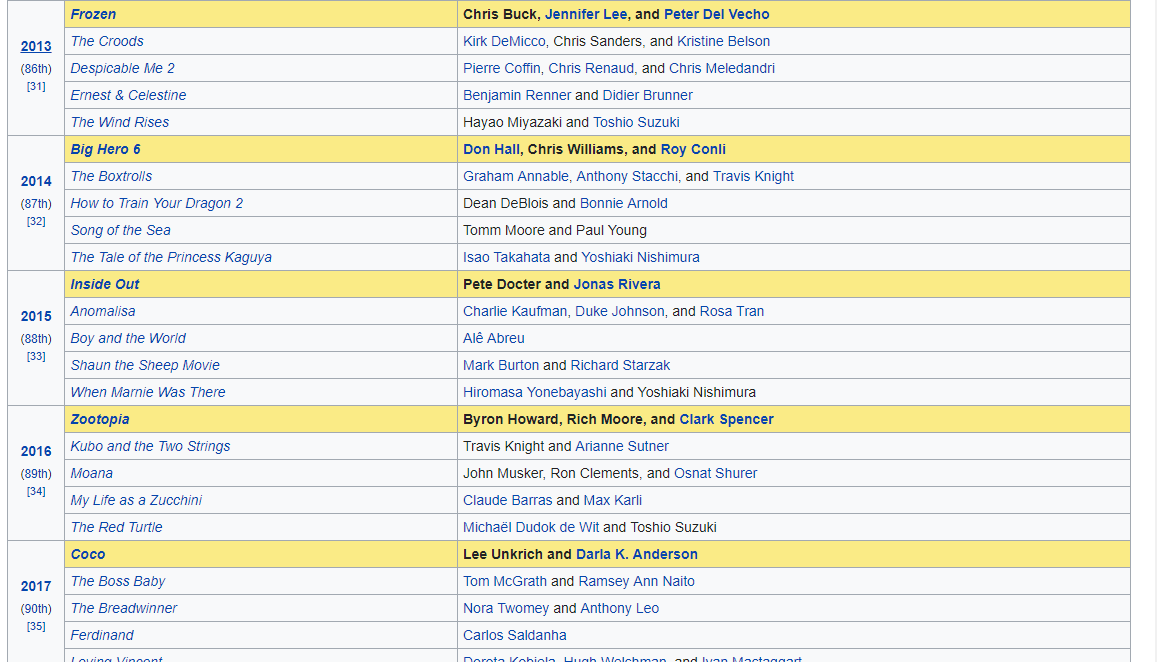 In the sixteen years that the award has been given, Walt Disney Pictures has won the award twelve times. Thirteen, if you include Spirited Away and fourteen, if you include Curse of the Were-Rabbit due to Disney’s new merger with Fox. Do you want to know why this is? It’s because nobody in The Academy cares and Disney is an easy group to give the award to. The section is so much of a joke that during the 2015 show, the award for Best Animated Feature was given out by Buzz Lightyear and Woody. Do you know what movie they gave it to? Inside Out. So essentially what people watching witnessed Disney giving an award to themselves. Viewers watched a marketing scheme, a piece of propaganda. Something that was created and rendered in their labs to make you go out and buy more Disney movies. This facade was made even more gross by the fact that Inside Out came out ahead against Charlie Kaufman’s modern masterpiece Anomalisa. This is not even to mention other years where a mediocre Disney movie won instead of a smaller masterwork. I’m sorry but Finding Nemo is not a better film than the strange and wonderful The Triplets of Belleville. Big Hero Six is most certainly not a better movie than the sublime Song of the Sea. There was a real part of me this year that wished The Boss Baby, despite how clearly unworthy it was of the title, would get the award. Yes, somehow I’ve reached the point where I believe that The Boss Baby would be less of a joke if it won than Coco. But alas, Disney got it’s pat on the back again this year.

The Oscars are in fact so much of a joke that even the Academy itself is willing to openly admit it. Anthony Hopkins, Kevin Smith, and director James Toback have all been vocally critical of the way the Oscars work. Toback even stated, “I have met certain people whom I automatically would never vote for because I didn’t like the 30 seconds that I spent with them. Listen, anyone who says that the Oscars is not a popularity contest is lying through his teeth. People vote for their friends and they vote against the people they don’t like. I would almost say that one in ten voters that I’ve known over the years actually do it legitimately, if there is such a thing.”

Don’t get me wrong, the Oscars do bring great films to the eyes of the public, ones that most people would never even think about going out and watching if they were not nominated. The exposure that these awards shows gives great artists is the one thing that I can say in support of them. I’m glad that people like Guillermo Del Toro and Sam Rockwell can pick up an Oscar because I love their work and I like seeing them get rewarded for it. The show just doesn’t matter to me anymore. I can predict half of the winners in my sleep and the other half is my second choice. The Academy is so blatantly predictable in every move that it’s almost laughable. Of course Get Out got nominated and of course it didn’t win best picture. The Academy makes sure to pick the safest, most politically correct films that they can. Things that they know the public will eat up like a well-done steak. I envy those who don’t think or don’t realize that the Oscars is nothing more than a way to keep Hollywood’s image as a great producer of art and not the dirty, slimy, focus group tested entity it is. It’s a way for Hollywood to say, “We care about movies, not money. See we have a whole day set aside to appreciate good movies. Also make sure to see Avengers 3 in theaters April 27th!” Once you see through the facade and the awards rot before your eyes, the Oscars becomes just as important as The Teen Choice or MTV awards.

Maybe it’s not a problem with the Oscars I’m having but a problem with Hollywood in general. With the recent Me Too movement exposing the hypocrisies, compliance and borderline lunacy of many of the big players in Hollywood, along with the realization that money is all the film industry boils down to, anything that has the Tinsel Town patent on it has just seemed more dirty or malicious. I guess I just wish there was a better way for people to find these films than the Oscars. I wish Hollywood cared about art and I wish people cared about art because I care about art and I care about movies. And who knew, maybe I’m the one who’s too cynical. But I just don’t care about the Oscars anymore. Yes, I see the irony in me writing such a long think piece on how I don’t care about them but I’m sad. I’m sad that something that used to be one of my favorite events of the year has become meaningless. It feels like a loss of innocence of sorts, the eating of the forbidden fruit. I still love many of the movies that were nominated and won this year, I still love many of the filmmakers and actors that were at the ceremony this year, I still love movies, but I don’t love Hollywood anymore, and I wish I did.

I guess the jet ski bit this year was kind funny though.

Movie man. More by Will McCracken