The date was December 18th of 2021. My bandmates arrived at my house at 1:00pm to practice before the big night. It was to be our first show in nearly two years, and we were going to make sure that we made an impact.

Part One: Before the Show

Rylan Yonkman and Jacob Fry arrived at the house at 1:00. Bringing drumsticks, cables, and other miscellaneous gear, our drummer and guitarist were ready to play live once again. We walked down the hall to the studio room and started practicing our set. The songs we had lined up were an alt-rock Let it Snow, a hard-rock Silent Night, followed by two original songs; Sleepy Time Blues and Sleeping in the Snow. But a mere hour into our practice, we had an idea. Rylan and Jacob have extremely Scottish heritage, so we figured we’d squeeze in a little rendition of Auld Lang Syne between our originals, with Rylan doing lead vocals with a brogue and Jacob playing the drums with timpani mallets. We managed to add another song to our set only three hours before we had to be at the venue.

After playing through the set and timing it tens of times, we were finally ready for the big night, and thus the process of moving gear had begun. Rylan took the guitar pedals, cables, and guitars, whereas I was stuck with transporting keyboards, cymbals, drumsticks, and additional drum supplies. But then, a new predicament sprung upon us: we didn’t have a stand for our synthesizer. So, in a last ditch effort to keep our set the way we planned, I threw a foldable table in the back of my truck and grabbed a tablecloth from my kitchen to use as a makeshift stand. And so, at last, we headed for the Depot to get set up.

After speaking with Sommer Carter, head of the Anacortes Music Project, I pulled my truck into the Depot’s rear parking lot and we began unloading our gear. Jacob put his cymbals where he wanted them, Rylan adjusted the parameters of his distortion pedal, and I set up the electric piano and synthesizer. Fortunately, the foldable table was the perfect height for the setup, and after plugging everything into the PA system and testing the volume, we sat in the crowd and waited for the show to begin 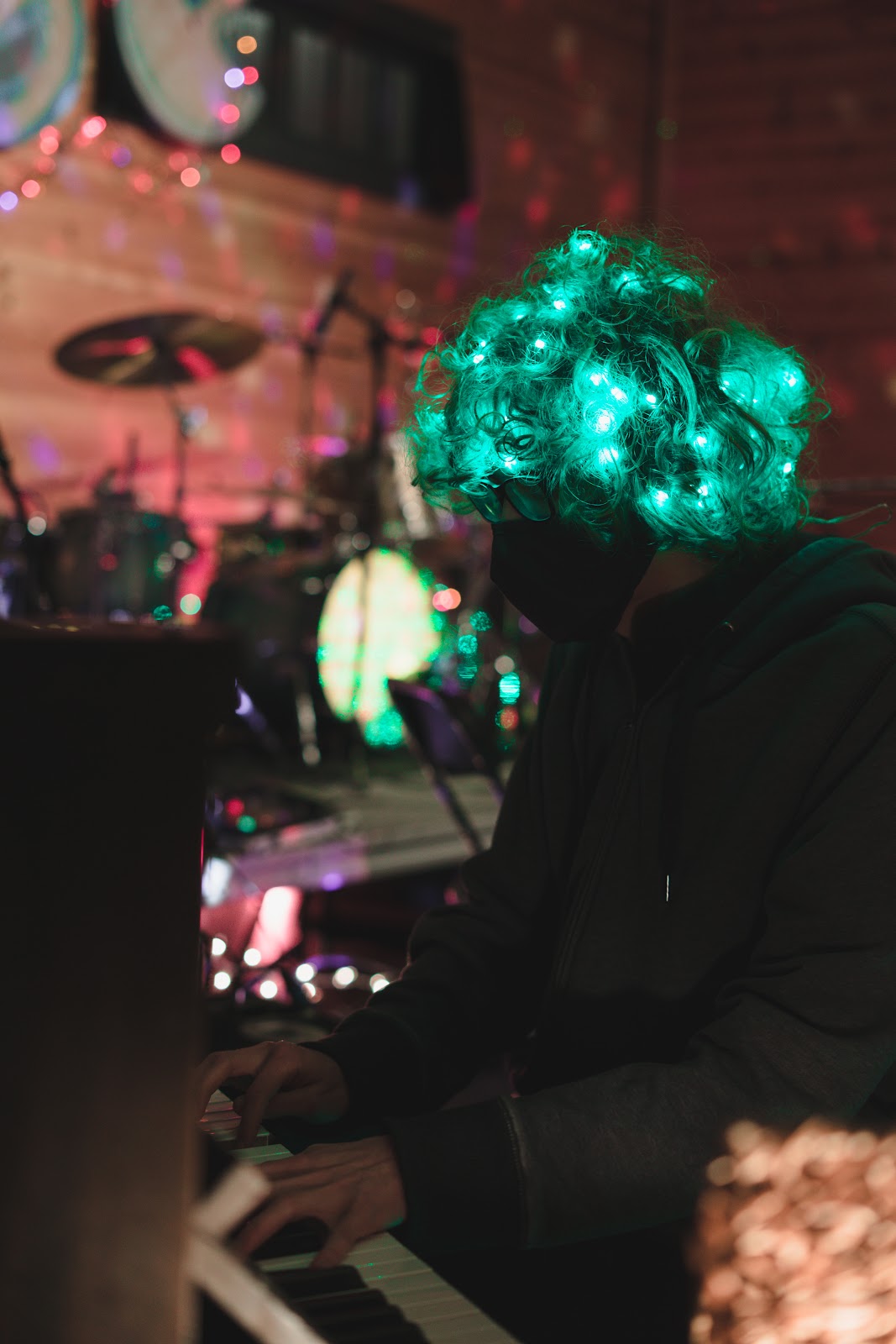 As more and more people poured through the hallway, AHS senior Tuscan Harper began his set of classical piano pieces sporting LED lights in his hair. And then, in no time at all, the clock struck 6:30, and it was time for us to get onstage.

As Tuscan Harper finished his set, he stood up and walked over to join the crowd as we applauded him. Then, a member of the Anacortes Music Project got onstage, grabbed the microphone, and introduced Rylan, Jacob and I as we hopped alongside him. And as our introducer stepped down, I grabbed the mic and said, “Good evening.” The loud pinging of Jacob’s bell countoff echoed throughout the venue, and we were abruptly launched into Let it Snow. At the end of the song, we decided to give Jacob his own solo, reminiscent of Led Zeppelin’s Moby Dick. And just like that, our next song had started. With a heavy metal-esque opening, it was almost a stretch to call this song Silent Night. I took the lead vocal on this one, and after the first verse I had a bass solo. 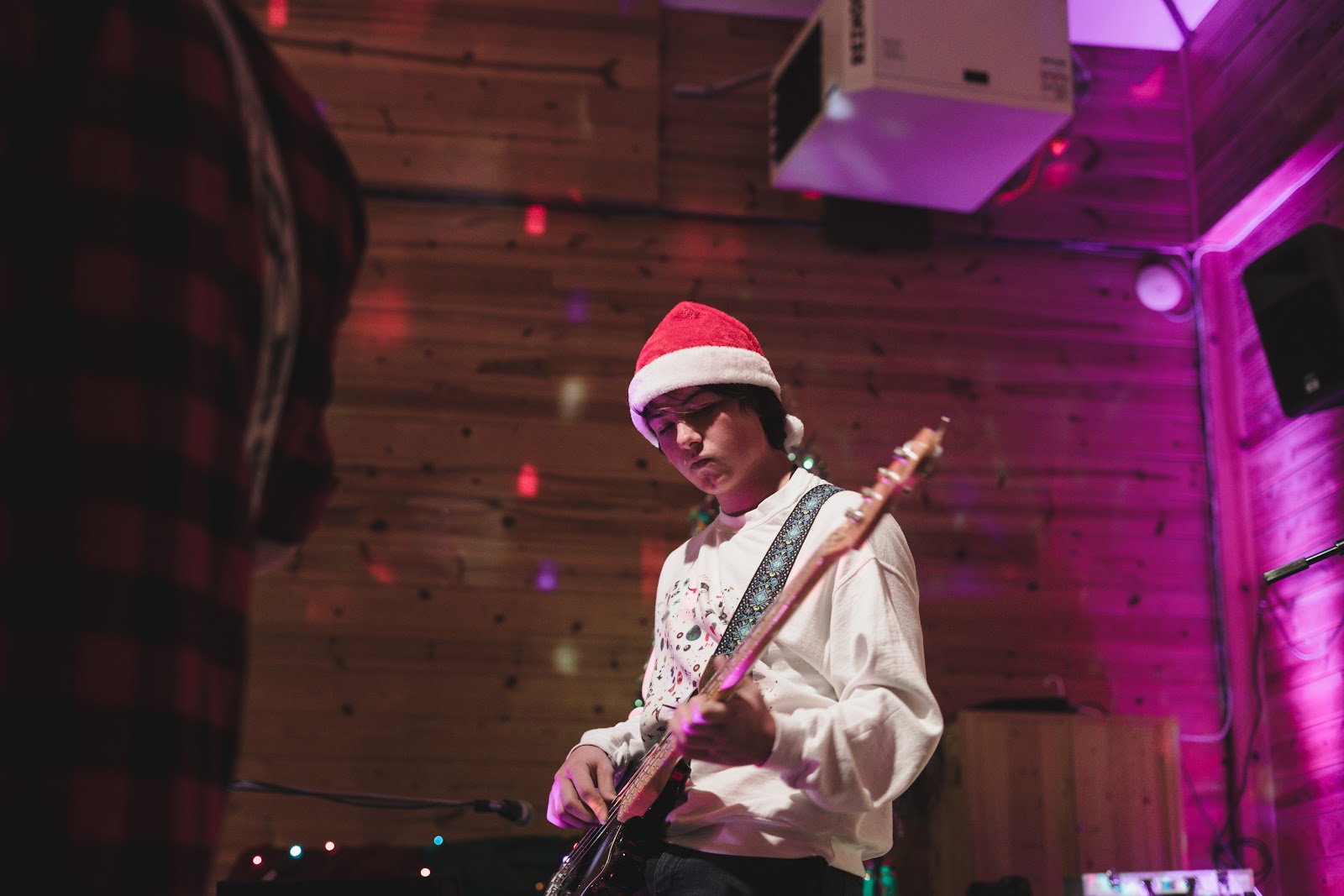 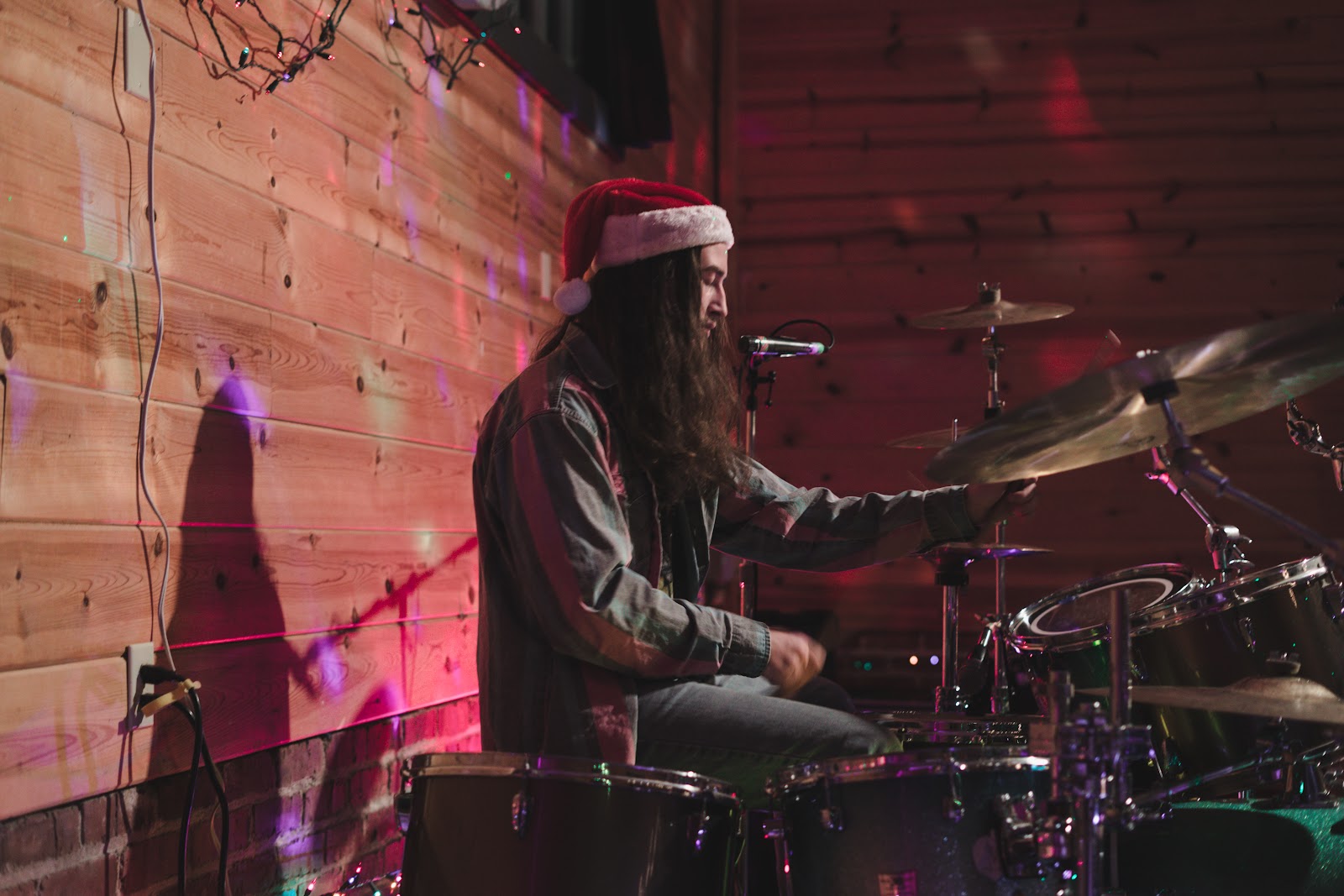 After Silent Night came the first of our two originals: Sleepy Time Blues. We had been messing with this song for a little over a year, but with the concert coming up, I decided to finally write lyrics for this bluesy jam. With the lyrics being somewhat of a prequel to our other original, it was only natural to close with Sleeping in the Snow, which Rylan wrote nearly two years ago. But in between, we played Auld Lang Syne as a bit of an interlude. I played the melody and chords on piano, Rylan sang, and Jacob used the timpani mallets on the drums to create an anthemic vibe. And then, it was finally time to play our closer. Our signature song, Sleeping in the Snow. With Rylan playing guitar and singing, Jacob grooving on the drums, and myself playing piano, synthesizer, and backing vocals, we were ready to play the song that we know best. 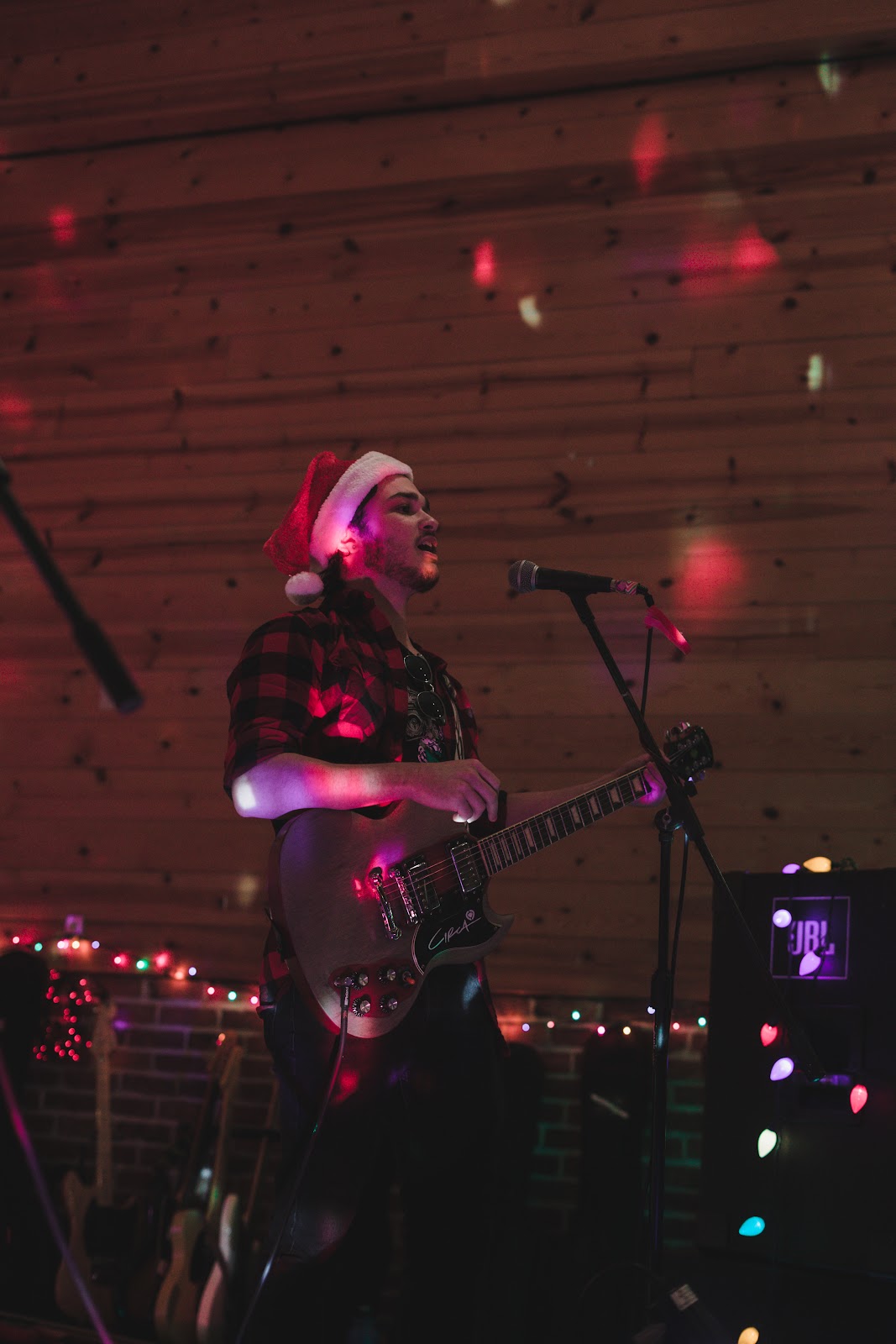 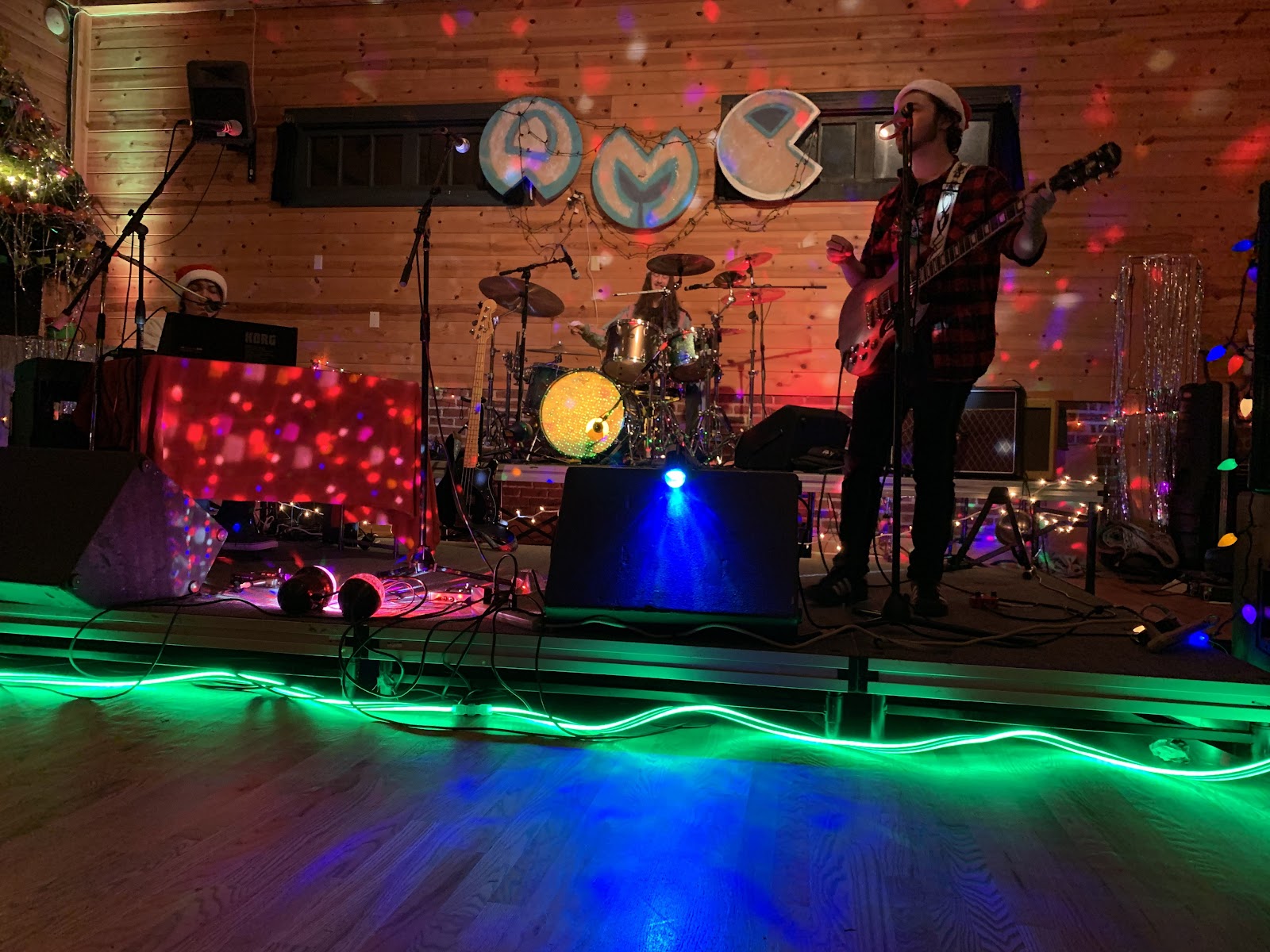 We played through each part of the song better than nearly every other time that we played it, and this time, we had an audience. From the intro, to the back-and-forth vocal in the chorus, the piano and synthesizer solos, the minor bridge, and all the way to the guitar solo at the end, we played it well. And just like that, our time onstage had concluded, and the AMP member who introduced us stepped back onstage to introduce the next group: Gems and Genies. There was a general sense of pride and ecstasy shared between Rylan, Jacob, and myself.

Part Three: After the Show

We sat back in our seats as Gems and Genies performed. Rylan drove Jacob home after they finished their set, and then he came back to watch the show with me. We watched Turn and Talk, Bobbi Jo Blessings, Derek Eisel, and the Enthusiasts before it was Rylan’s time to go. I stuck around and got to talk with Braydn Krueger, former drummer for the Lonely Forest, current drummer for Pearl Tottenham, and my former music instructor. He went onstage to play with Pearl Tottenham, and I watched in awe. 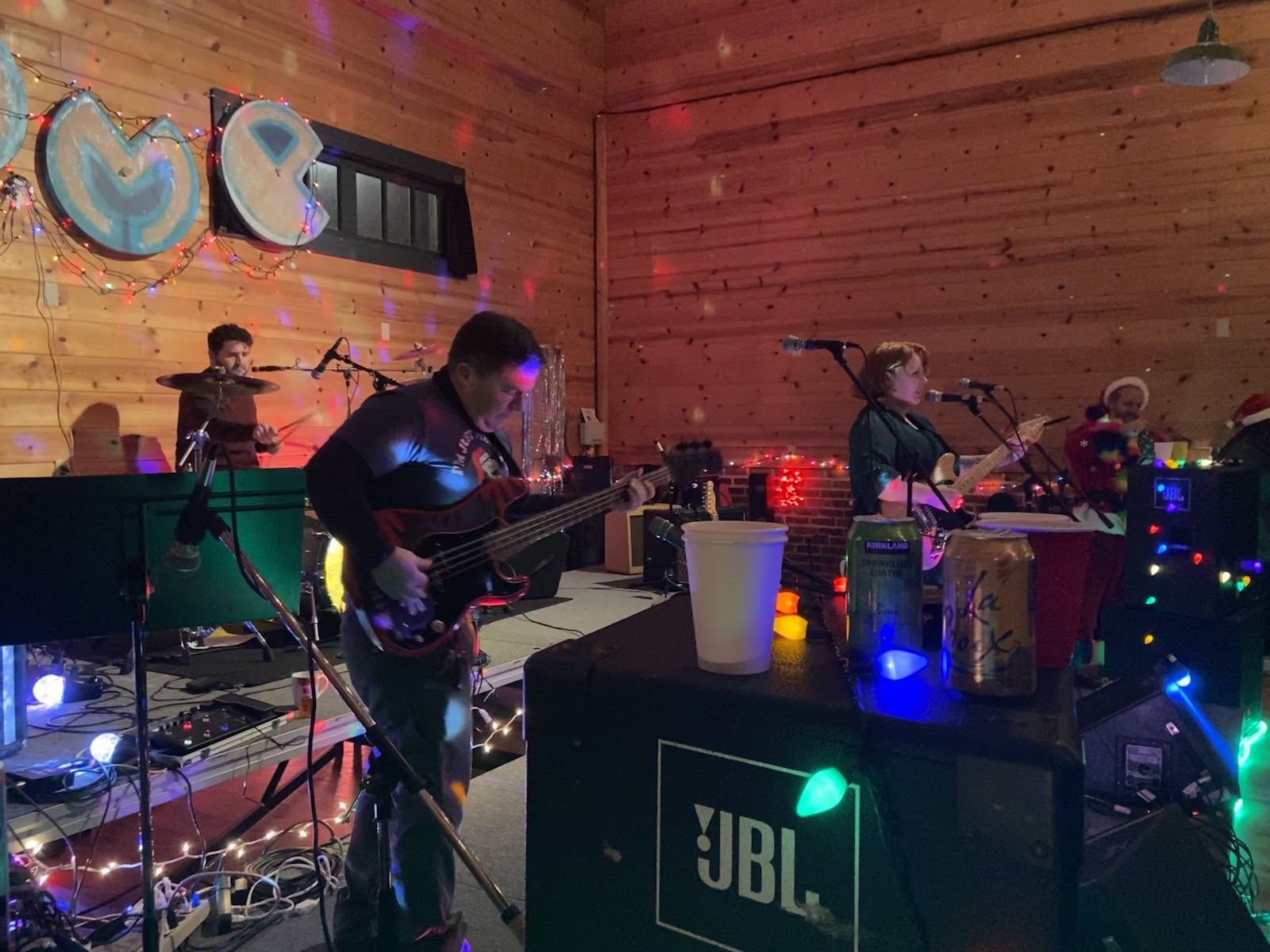 For the last two acts, I was standing by the side of the stage and I was suddenly handed a couple of shakers and added as an auxiliary percussionist alongside Savannah Woods and the Mosstones. The Mosstones’ set included many standard holiday tunes, including a rendition of Dreydl that went on for some 15 choruses. And after they played a couple well-known rock numbers, their set was over and the night of music had concluded. I went to the side of the stage and collected my things to put in my truck. It had begun raining again, so the trip home had to be a quick one. With a bass case in the backseat, a piano in the bed, and a synth in the passenger seat, I drove home with intent to keep everything dry. As I pulled into my driveway, I made three trips to get everything inside and I left it all in my living room. I had ended up right where my journey began, and I felt honored to be part of such a magical evening of music, dancing, and fun.