In 1906, Anacortes High School was established. It was called The Columbian. Around the time of the First World War, Anacortes population rose dramatically, and with that came a cramped high school. Because of this, the high school we know today was founded, and The Columbian became a middle school. It would later be demolished in the 1960s. The only things that survived the rubble of the old school were the main steps, currently located by the gym and field parking, and the old school bell. The bell used to sit atop the old school, rung when Anacortes was victorious in any sports competition. The seniors decided that they would sign the bell every year, and the tradition stuck. It now sits outside Williams Gymnasium, covered in as many coats of paint and unique signatures as there have been graduating classes, all of which lie beneath its surface.

During the 1970s, Anacortes school spirit hit an all time high, and many a high school tradition was formed. Some survived for a while while others were soon gone. Toga day became a staple of our school with the class of ’78, with or without the influence of Animal House. “Only seniors were allowed to dawn their togas because it was way too cool for the underclassmen”, Ken Welk stated. With the spirit day came a toga dance, held off campus with nearly the whole class in attendance. This is one of the classic traditions that is still around today.

The seniors of ’78 had some other ideas as well. Two words: bed racing. A team of seniors would take a mattress and convert it to a go-kart. Beginning at the top of Commercial, teams would race down to the end of the street. There was only one rule: one person had to stay on the bed at all times. The others pushed and “Hoped their car would go strait”, said Welk. The winners received a commemorative token for their success. Sadly, this tradition only survived a few years. 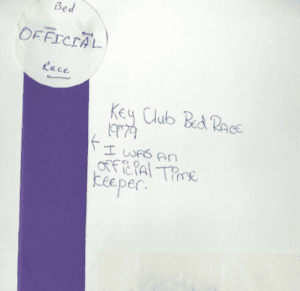 The Powder Puff tournament was another short-lived tradition. Started by two teachers, Kevin Miller and Ed Vadset, as a way of fun entertainment, the football players and cheerleaders would switch places the night before the homecoming game, complete with both band and concessions.  Girls suited up in shoulder pads while the boys would snag some skirts and practice their cheers. Eventually, someone got hit too hard and was knocked out cold, and the Powder Puff tournament was no more.

Most of these traditions took place during Homecoming week. The crown jewel of these festivities would have to be the Homecoming bonfire. The night before the big game, students headed down to the bonfire to socialize, eat ice cream, and enjoy themselves. The event was even held with live music. “It was like a big tailgate party”, Welk described. Sadly, teenagers and fire don’t seem to mix well and administrators had to cancel the event due to too rambunctious behavior.

In the mid 1980s, ASB created one of the most creative fundraisers any high school has ever seen. Seniors would decorate elaborate cakes which underclassmen would buy. An assembly would be held along with along with an auction. But it wasn’t just the cake being sold, the senior who baked it also came along being the buyers servant for the entire day. During one of the assemblies, students just kept on bidding as the day dragged on. This, however, was eventually seen as disruption to the school day and the tradition was no more.

Are there any traditions you think that AHS should start or bring back? Leave a comment below and let us know.